“Hi Sarah, This is my second order. Used  it first for my husband’s ongoing outbreaks of boils , masked with antibiotics. It took longer to heal ( as we expected) but so far no more problems. Then we have a friend with a longstanding leg ulcer following injury years ago. He says it has been the best thing used, the pain is not there, he can walk more comforably. I have also given it to 2 of my staff, one had burnt her leg badly on a hottie! The other had an infected bite which had started to involve the lymph glands. Definitely my first to go to remedy. Thankyou.”

“Hi – Firstly I love your bentoniteclay & diatomaceous earth.  I have sent a few of my patients to your site and they love it too.  One had ulcerated varicose veins which responded very very well and with speed (which we needed).  I am contacting you this time about a couple of patients with lymphedema from previous breast cancer – could the clay help to shift the fluid from their swollen arms?  Warm regards Georgia”

“Hi Georgia, Thanks for your lovely email. It is always wonderful to hear of the results. Yes the clay would be very good for lymphodema. It needs to be packed on thickly and left in place for probably around 2 hours minimum. Using food wrap to cover would be the best thing to prevent the clay from drying out. Cover the entire underarm and side of the breast. Daily to start. I would also recommend clay baths to reduce overall toxin load. Stay in touch and let us know how you go.”

2 months later Georgia contacted us to order more clay and told us that the clay had “worked fabulously” for the lymphodema patients.

“I am a slightly wobbly 83 year old man. One night in the dark, I missed my footing outside and fell. I grazed the front of my right leg badly and ended up in A&E for several hours while they dealt with it. After some days of dressings it was suggested I try a clay poultice. We dressed the whole wound every night with a thick clay mixture and wrapped it in glad wrap. We wrapped this with a bandage and a stocking. During the day we left this off. In just over 3 weeks, like a miracle, it was healed. I am back walking around Henley Lake and my normal life has become reality again. With thanks to Sarah who gave us this new way of treatment.”

Sarah Beesley (practitioner) was asked by Michael’s wife Julia to help with her husband’s leg injury.

Sarah’s summary: “The district nurses had come regularly to dress the wound but there had been little change and Michael was starting, in Julia’s words, to become depressed because the wound was affecting his mobility and he was no longer doing the exercise he did everyday. He’d been on antibiotics because there was a high risk of infection setting in and previous wounds he’d had, had taken a very long time to heal.

I showed them how to pack his leg with clay, keeping it on overnight and washing it off gently every morning. The wound was left to air during the day with only a light bandage on it when he needed to wear trousers.  He also had a sore on the back of his leg that wasn’t healing after 6 weeks of standard treatment, antibiotics and regular dressing. We decided to pack that as well.

The following photograph shows Michael’s leg 12 days after the accident and before we started to use the clay. 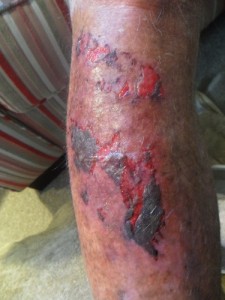 After 3 days, Michael was back to walking daily. The wound had evidence of the skin starting to regrow, there was good healthy scab formation and he was able to leave the wound undressed. After 1 week, the sore on the back of his leg had completely healed. At this stage he was back to using the ride-on mower which is where I found him when I called in to assess the 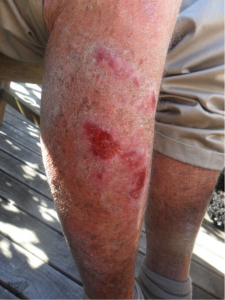 This photograph shows progress 2 weeks after using the clay every night. The bruising has completely gone and much of the wound has healed. We continued packing at this stage even though the wound was well under control. This was largely because I know how difficult it can be to get wounds to heal in the elderly. Michael had developed a large cold sore on his bottom lip so we decided to pack that twice a day as well and I put him on some nutritional support. The cold sore resolved very quickly and 9 days later, his leg was almost fully healed! 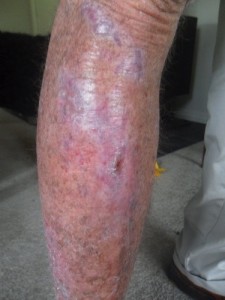 This photograph shows where we were at 3 weeks after starting the clay packing.”